Weddings Around the World: Cross-Cultural Traditions You Can Incorporate into Your Wedding

Tens of thousands of weddings occur across the world every year. Each country, religion, and culture has different wedding customs, which are full of symbolism. Here are just a few of the wedding traditions from different cultures that you can incorporate into your own wedding day!

Indian Weddings
Mehndi (Henna)
One of the most recognized traditions in Indian weddings is Menhdi, or the Henna Ceremony., which occurs the night before the wedding ceremony.  Henna is a paste made from finely ground leaves from the Henna plant. The hands and feet of the bride are adorned with elaborate designs. For more modern weddings, other female family members and friends apply Henna on their hands and feet, as well. Traditionally, the names or initials of the bride and groom are hidden within the design, and the groom has to find both names in order for the wedding night to commence! Because the henna design signifies the strength of love in a marriage, after the wedding the bride is not supposed to perform any housework until her Menhdi has completely faded away. 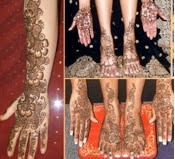 Greek Orthodox Weddings
Crowning Ceremony
The Crowning Ceremony is said to be the highlight of the Greek Orthodox Marriage Service. The Bride and Groom are regarded as part of the “royal family” of God and are crowned king and queen of their own dominion, their new union and family. The Bride and Groom are crowned with thin white crowns known as stefana, which are joined by a white ribbon and are blessed by the priest. The stefana symbolize the glory and honor that is being bestowed on them by God, and the ribbon symbolizes their unity. The Koumbaro (Best Man) then exchanges the crowns between the heads of the couple three times as witness to the sealing of their union. Tradition says that the couple is supposed to display their wedding crowns in a case called Stefanothiki that is hung over their bed. 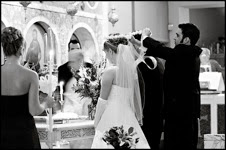 Bombonieres (Jordan Almond gifts)
Another common Greek Orthodox tradition is the gift of Bombonieres that are filled with Koufeta, or Jordan Almonds. These favors are given as token of good fortune and happiness. Their bittersweet taste symbolizes life. The sugar coating represents the hope that life will be blessed with more sweetness than bitterness. Bombonieres are always filled with an odd number of almonds (traditionally five to signify health, wealth, longevity, fertility, and happiness) because the odd number is indivisible and symbolizes how the newlyweds will share everything and remain undivided. Tradition says that if an unmarried woman puts the almonds under her pillow, she will dream of her future husband!

Hispanic/Latino Weddings
The Arras (Coin Bearers)
The giving of the Arras is predominant in the Hispanic culture. The Arras is a small box containing thirteen gold or silver coins. The thirteen coins represent Christ and His twelve Apostles. The groom presents the Arras to the bride after the vows have been exchanged as a symbol of his readiness to provide financial support in their married life. 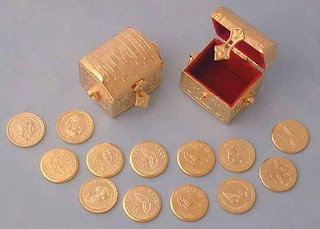 Lazo (Wedding Rosary)
A rosary or cord in the shape of a figure eight is placed around the shoulders of the bride and groom to symbolize the unification of the couple.

Money Dance
The Money Dance is performed at the reception. Guests take turns dancing with the Bride and Groom and pinning money on their clothes (or putting dollars in a basket if the couple doesn't want to use pins). This dance allows the couple to spend a few moments with each of their guests.

Jewish Weddings
Circling
The Bride circling the Groom seven times is a symbolic custom in a Jewish wedding ceremony. The seven circles parallel the seven days of creation and symbolize that the Bride and Groom are creating their own “new world” together.

Chuppah
A Jewish wedding ceremony takes place under the Chuppah, or wedding canopy, and it is a symbol of the home that the new couple will build together. The Chuppah is held up by four poles and is open on all sides to represent how friends and family are always welcome in the couple’s home.

Breaking of Glass
At the conclusion of the wedding ceremony, a glass is placed on the floor and the Groom shatters it with his foot, as the guests shout “Mazel Tov!" meaning congratulations and good luck. The broken glass serves as a reminder of of the fragility of a marriage, and it is said that the number of shards of glass represent the number of children to come!

The Hora
The Hora is a circle dance done at the wedding reception. The Bride and Groom hold opposite ends of a handkerchief while being lifted into the air on chairs by the guests who are honoring them as King and Queen of the night. The dance is designed to allow guests to bless the couple as well as to reflect the idea that their love should be like a circle, infinite and never-ending.

African American Weddings
Jumping the Broom
Jumping the Broom is a popular African-American tradition at wedding ceremonies. After the couple has exchanged their wedding vows, they jump over the handle of a broom. This ritual represents the past being swept away and the joining of two families in unity as they jump over the threshold into their new life. Some say that whoever jumps highest or lands first over the broom is the decisionmaker of the household! Often the guests are included in the ceremony by writing their good wishes for the couple on paper and tying it to the broom with ribbon.

Catholic/Christian Weddings
Unity Candles
The Unity Candle is very popular in Christian wedding ceremonies. There are many ways to integrate the unity candle into the ceremony, but most commonly, at the beginning of the ceremony, the mothers from each side lights one outer candle. This symbolizes that the Bride and Groom are coming from two separate homes and families. When the Bride and Groom later take those outer candles and light the center candle together, it symbolizes the merging of their lives together and the start of a new family and life. 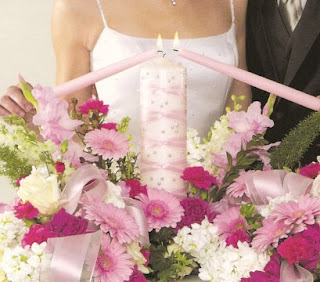 Sand Ceremony
The Sand Ceremony is sometimes done instead of the Unity Candle and has the same meaning. By merging two different colors of sand, it symbolizes the joining of two families. Because it is impossible to separate the different color grains once they have been combined, it demonstrates the permanent nature of the commitment being made.

Chinese Weddings
Tea Pouring Ceremony
The Tea Pouring Ceremony is the most significant event in a modern Chinese wedding, when the Bride is formally introduced to the Groom’s family. This ceremony typically takes place in the groom’s home. The couple offers tea to their elders, including the Groom’s parents. Acceptance of the tea is confirmation that the family has welcomed the Bride into the Groom’s family. Tea is used because it is China’s national drink and serving it is a sign of respect. After drinking the tea, gifts for the Bride and Groom are presented in red envelopes, stuffed with money or jewelry. The envelopes are called “li shi,” meaning “lucky.” 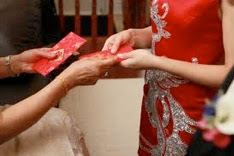 What are your favorite weddings customs? What traditions will you incorporate at your wedding? Tell us below....


*Sarah Madonia contributed to this article.

Posted by Camille Victoria Weddings LLC at 11:11 AM

Camille Victoria Weddings LLC
Chicago, Illinois, United States
Camille Victoria Weddings LLC is an award-winning Chicago Wedding Planning company. Bashert Weddings is our blog to feature the beautiful weddings we have worked on and offer tips and advice for wedding planning in Chicago and beyond. Bashert means meant to be, and we feel so blessed to be able to help Chicago couples start their journeys with their basherts! For more info on our Chicago wedding planners, visit www.CamilleVictoriaWeddings.com